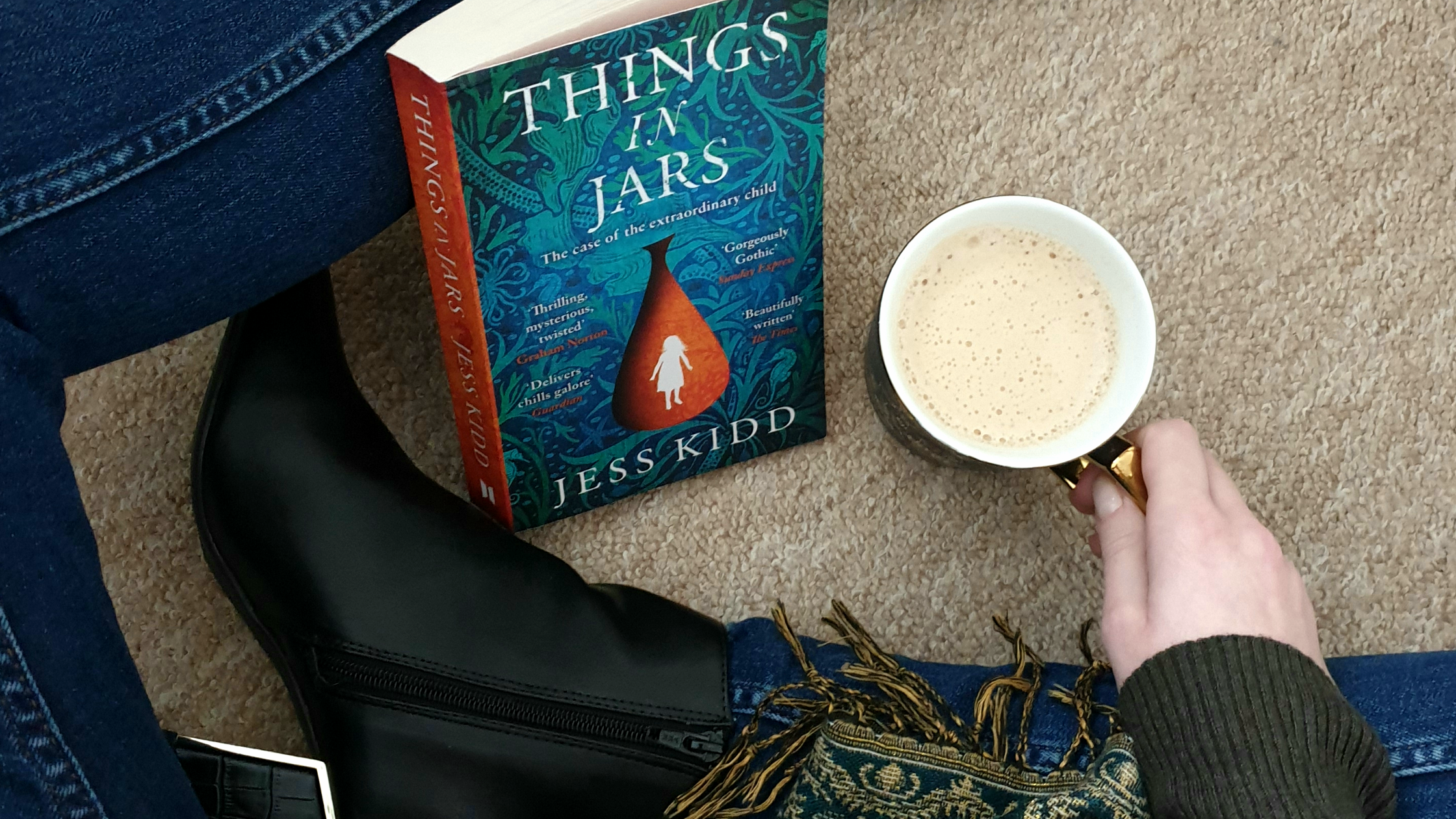 Things In Jars is an eccentric hybrid of genres, combining historical, mystery, fantasy and gothic comedy.  The prose is often poetic and lyrical, which I liked, but for me personally it lost its originality for being too similar to other books I’ve read.

The novel starts strong, with such a distinct, jarring writing style that instantly caught my attention. In the first couple of chapters, the author uses lots of fronted adverbial phrases to create the poetic effect. For example:

“As pale as a grave grub she’s an eyeful”

“Trussed in a canvas hammock she’s no weight”

This made it an interesting read to begin with. But as the novel progresses, this technique is used less and less as it slips into a more conventional style of writing. This was a shame, however it retained its poetic stance through absolutely no lack of creative description:

“The raven levels off into a glide, flight feathers fanned”

“Prudhoe opened the door and let a spectre of past in. it whistles through the room; stale fear, bitter hurt.”

Things In Jars opens with a woman, Bridie Devine, smoking a questionable substance in a graveyard while conversing with a scantily-clad ghost. Bridie is a detective of sorts, offering her services to help solve crimes with an unconventional perspective in 19th century London. In this novel, she is drawn into the case of a missing child – except this is no ordinary child – and her investigation takes her from fairy legends, Irish folklore and circus curiosities to the most disturbing depths of her own childhood.

Throughout the novel the themes of invention, discovery and science in Victorian society are contrasted with superstitions and mythical tales, blurring the boundaries between what is real and what is imagined. As the story unfolds it’s less about the mystery of who stole the missing child (the perpetrators are revealed early on) and more about uncovering the identity of this child and why she was taken.

It draws on timely fascinations from the Victorian Era; those of abnormality and spectacle, examination and understanding. I think the significance of the female protagonist (and multiple other strong female characters) felt out of place given the decades in which the story is set. Drawing on the themes of oddity and intrigue, it suggests that perhaps the women of this time themselves where significantly misunderstood.

Alongside these more serious undertones is a spritely and comical quality to the narrative. Not just in the peculiarities of the characters themselves, but also in its observations and metaphors:

“The moon sees the beauty and cruelty of London: her whores and drunks, saints and murderers, thieves and lovers and fighters.”

“At best she viewed Lydia as a dress-up doll, at worst an inconvenience, like February or indigestion.”

Towards the end of the book I became less invested in the story, to the point where I cared very little about what happened. I’m not entirely sure why, considering I enjoyed it so much at the start. I think as I got deeper into the story and began drawing comparisons with other books, I felt like I wasn’t reading anything new. The content about mermaids and sea creatures reminded me of The Mermaid & Mrs Hancock; the macabre ideas around rarity and spectacle reminded me of Menagerie; and the way the novel concluded with what felt like a very rushed an action-packed ending reminded me of the style in The Fourteenth Letter.

For this reason I’d give Things in Jars a solid 3/5 – it was an entertaining and enjoyable read, but it didn’t make as much of an impact on me personally as other similar titles.